I’m A Celeb Inspired? Here’s How Much Your Castle Mortgage Would Be…

Since I’m a Celebrity Get Me Out Of Here moved to UK shores as a result of the global pandemic, it seems the whole nation has caught castle fever

Set within the spectacular ruins of Grade I listed Gwrych Castle in North Wales, this year’s series featured its location’s beauty prominently and seems to have made viewers wonder if they could afford such grandeur.

We’ve witnessed a 947% increase in enquiries about mortgages for castles since I’m a Celebrity 2020 began via Online Mortgage Advisor.

According to Google Trends, since I’m a Celebrity Get Me Out Of Here started on 15th November until the final on 4th December 2020, there was a 250% increase in people searching for ‘castles for sale UK’; and a 50% increase in ‘castles estate agents’.

And if you too are getting curious about castles and wondering what’s out there to purchase (you know, if you won the lottery or suddenly get a huge inheritance pay-out from the great auntie you never knew you had), we’ve done the hard work for you.

Take a look at 17 castles right here in the UK that are on the market and available to buy right now, along with what the monthly mortgage payments would be:

With 13 bedrooms, a cinema, helipad and the bragging rights of being the site of Mary Queen of Scot’s preferred residence, this majestic castle is sure to leave you feeling like royalty. In fact, you’d probably have to be a prince or princess to afford the cool £8million price tag.

It has been spectacularly restored and features secret stairways, hidden doors and its very own, private tavern in what was once the tack room of the stable block. Boasting its own gate lodge and three cottages in addition to the main 13-bedroom castle, this property, above the River Doon, also has its own 7-seat cinema, ballroom, library, stable block and wine cellar with vaulted ceiling. Dating back to 1818, this A-listed Baronial castle with its two stunning turrets offers spectacular views over Loch Lomond and the mountains beyond.
With 15 bedrooms and the potential to become an extraordinary wedding venue or hotel, viewers would fall in love with this place as soon as they see the ornate fountain out front with its classy carriage turning circle. Looking a little less castle-like than some others on this list, Brechin Castle is a castle nonetheless. This property has more bedrooms than all the others, 16 in total, and a further 5 estate cottages to boot.

On the site of a much older fortress owned by Scottish Kings, Brechin Castle towers above the River South Esk and has a renowned walled garden. Hopping across to Wales, the home of the I’m a Celeb castle, there’s a stunning property on offer in the form of Glandyfi Castle.

In a breathtaking spot overlooking the Dovey Estuary and mountains of Snowdonia, the fully restored Regency Gothic style castle from the 19th Century features a beautiful medieval stone courtyard with a glass roof to make an enviable atrium; and also has a library, grand imperial staircase and a one-bedroom cottage within the grounds… in case the 10 sleeping quarters in the castle weren’t enough! Moving to England, this Grade I listed property has played an important part in our country’s history, playing host to a number of Kings and Queens over the years, including Henry VIII’s unfortunate wives.

With 10 bedrooms and enough original features to make you swoon, Devizes Castle captivates with its striking turrets and stunning features, including its very own library and gorgeous grounds. 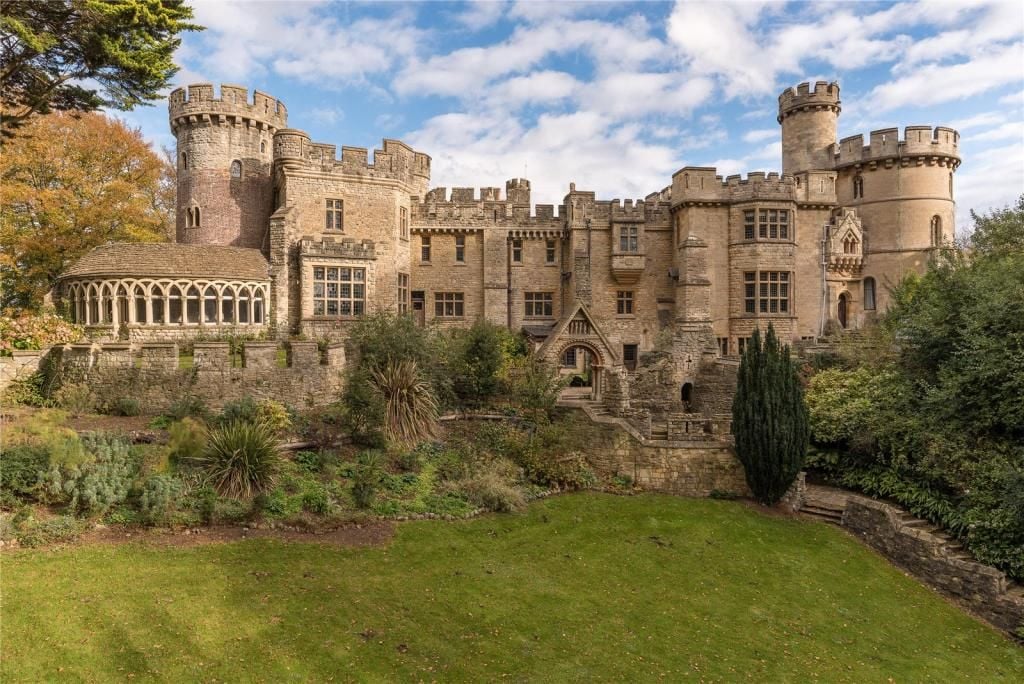 Not quite as authentic as the others on our list, Wartnaby Castle is part of the Little Belvoir Estate and dates from the early Victorian period.

Built in the style of a Highland castle, it has its own hexagonal turret and familiar castellations along the roofline, so it certainly ticks a lot of those castle boxes.

Grade II listed with nine bedrooms, a wine cellar, grand reception hall and other properties available separately within the stunning grounds, this certainly puts the I’m a Celeb digs to shame. Although the castle part of this historic 17th Century property is uninhabitable, there’d be absolutely nothing stopping you from saying you lived in a castle!

Nestled in the South West of England in Tetbury, this seven-bedroom property is attached to a Grade I listed castle steeped in history, with Cotswold stone barns, stable-yard with paddocks and additional properties available within the 11 acres. Boasting its own arboretum, wine cellar, games and billiards rooms and two three-bedroom cottages in its grounds, Coupland Castle is somewhat of a steal. With 11 bedrooms and a history dating back to the late 1580s, this sprawling castle has been extended over the centuries with stunning towers and features; and has a range of outbuildings such as stables, workshops and a hay barn. Back over in Wales, this six-bedroom castle may seem more modest than the rest, but if José Mourinho was once rumoured to be looking at making this place home, you know it can’t be too shabby.

Constructed in phases between 1977 and 1994, with recent further expansion, it’s also not as steeped in history as some others on our list; but hey, at least there’s less chance of ghostly figures in the night. It has panoramic views of the Clwyd Valley and Snowdon, with its own detached guest lodge, 10 acres of countryside and a cinema room. By far the coolest feature of this Scottish castle is a glass walkway over an old dungeon, but its library, two on-site cottages and views over the Lothians and Firth of Forth from a rooftop walkway and stone window seats also provide that wow-factor.
With six bedrooms and other original features, such as original corbels exposed when the castle was destroyed by a fire in the Battle of Pinkie, an inaccessible old staircase and original stone WC called the Laird’s Lug, you’ll feel like you’ve stepped right back in time. Dating back to 1897, this seven-bedroom Scottish Baronial Style former hunting lodge from the Victorian era occupies an elevated position that offers amazing views over the surrounding countryside.
With its own Snug Bar (that certainly won’t be serving up any I’m a Celeb style smoothies) and a grand reception hall, it’s any wonder residents can ever tear themselves outside to explore the 56-acres of beautiful woodland and grounds. Whilst the castle part of this deal may well be in ruins, it has fantastic development potential and an artist’s impression of how it could look if restored to its former glory.

The castle ruins alone come in at £225,000, but dating back to the late 15th century with an arched gateway featuring a coat of arms carving, it’s crying out for restoration. The stunning country house, originally a Georgian farmhouse and redeveloped in Victorian times, has six bedrooms, a sweeping tree-lined driveway, wooded grounds and jaw-dropping sea views. This A-Listed tower castle in Scotland may only have three bedrooms, but what it lacks in sleeping space it certainly makes up for in other areas. A stone turnpike staircase, beams, solid oak floors, barrel-vaulted kitchen and other period features certainly make this feel every bit the castle.

Originally built in 1570 but fully restored in the late 1980s, Craigcaffie Tower is just a stone’s throw from the coast, with views from castellated sentry walks. At £395k, this is certainly a more achievable purchase price and costs £95k more than ITV paid to hire the I’m a Celeb Gwrych Castle. You know a place is going to be pricey when they don’t tell you the cost upfront. And when it’s a castle. With a moat. And 14 bedrooms. This absolute beauty of a castle in the midlands has three separate turrets and an ornate sandstone bridge where the wooden drawbridge would’ve once been; and it’s one of the only Grade I Listed moated castles in the country today.

Dating back to Saxon times, it has a rich history and more brag-worthy features than you can count, such as its Jacobean staircase, carved wall panelling with coats of arms and, did we already mention… an actual MOAT? Another castle with a secret price tag, Earlshall has 10 bedrooms and a further three cottages within its 53 acres, which also happen to boast a walled garden, bowling green and a secret garden straight out of a fairy tale.

It has a five-car garage for all your Ferraris and Lamborghinis, which certainly wouldn’t have been around in 1546 when the castle started to be built. Visited by the likes of Mary Queen of Scots & James VI of Scotland (aka James I of England), and so-say haunted by the sound of Sir Andrew the Bloody Bruce’s footsteps on the spiral staircases, there’s enough history here to mean you’ll always be learning something new. This eight-bedroom castle from 1338 is a sprawling, category A listed tower property in South Scotland.

With its own library, gatehouse and two cottages situated within its 166 acres, the lucky buyers can enjoy salmon fishing rights on the Girvan Water, grand dining rooms and the fact that they’ll be living in something that looks straight out of Harry Potter. *based on 3% interest rate and 25-year term. Averages worked out excluding POA castles, due to either only having valuations from Zoopla which may not be accurate, or having no price information at all.

Taking into account that you’d need at least a £15,000 per month take-home salary to cover the monthly repayment, bills and other living costs, that would require a job that pays an annual salary in the region of £318,603.72.

So, what do you say? If, like most of us, these are too far outside your price range, why not don your finest garments, put on a posh voice and go for a viewing to have a nosey…

For the purpose of the analysis, the castles without a list price (POA) were not included, despite two or the three having valuations available via Zoopla.

This was to reflect that the valuation may not be accurate. Furthermore, a hypothetical deposit (15%), interest rate (3%) and mortgage term (25 years) was used, despite the fact that in many circumstances, a higher deposit amount would be requested for such a high-value property.

The running costs, where available and listed, were via Zoopla, which again may not be 100% accurate.