New typologies unveil reality of getting a mortgage

Property-focused Brits see owning a home as the pinnacle of success, with 41% saying that being declined a mortgage is an embarrassing secret that means they’d failed in life.

Forget bagging the dream job or paying for children’s education as indicators of success, the nation places so much value on owning property that millions think being declined a mortgage would be worse than missing a promotion at work (13%)or being dumped (11%).

The research into the nation’s perception of owning a home, conducted by Online Mortgage Advisor, revealed that the failure associated with being declined a mortgage would make a fifth of Brits think twice about trying!

Don’t let a mortgage get in the way

We specialise in connecting people with specialist advisors who have the right experience helping people who have been in similar circumstances.

With our experience of working with people who may have previously been declined or faced difficulties, and to encourage more consumers to consider getting on the ladder, we have identified five audiences that represent some of the most common situations typologies that may assume they won’t ever qualify for a mortgage – but actually could. 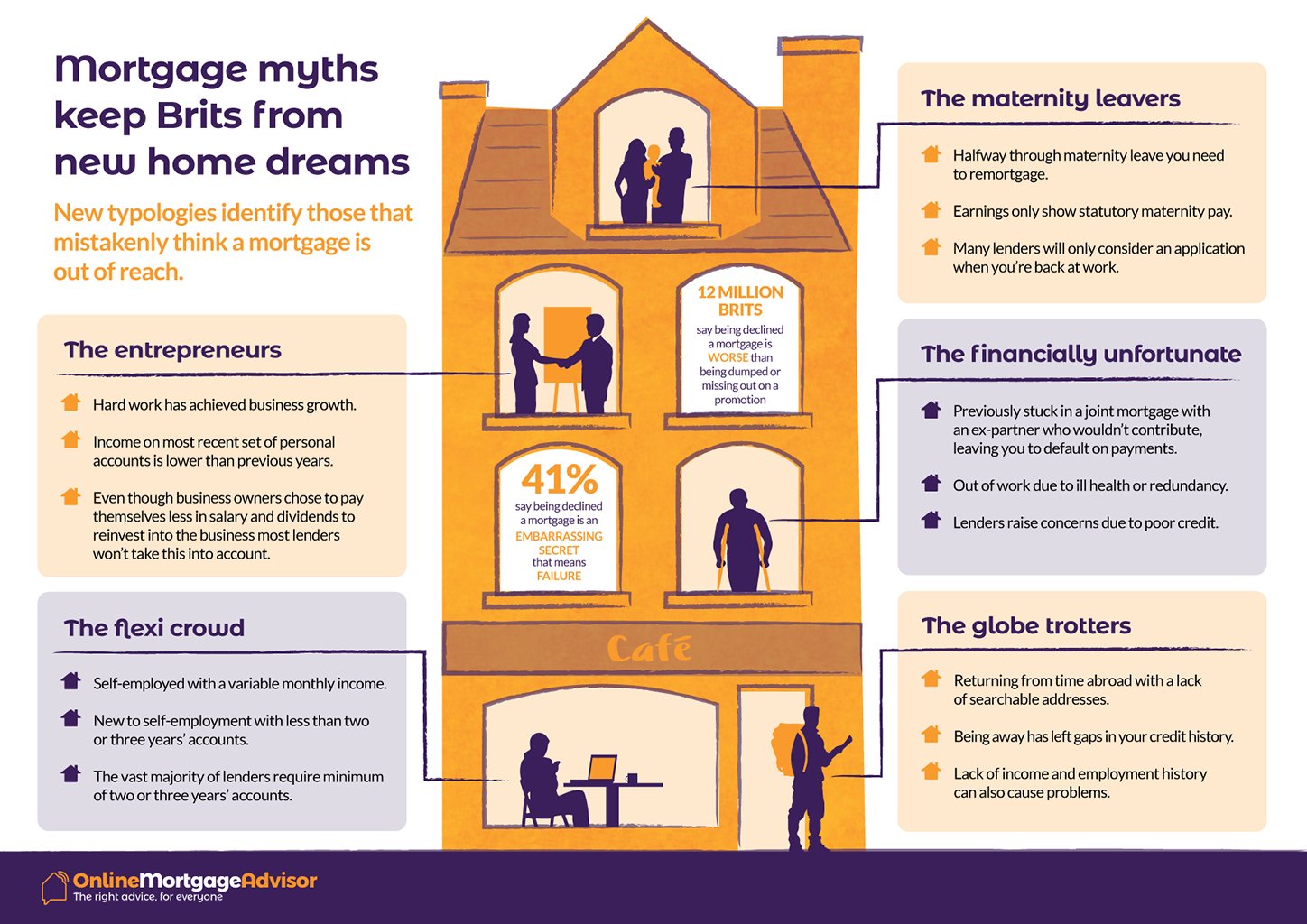 Despite the value placed on owning a home showing no sign of changing, there are still major misconceptions about mortgage eligibility.

Our research showed that people are avoiding pursuing their dream of getting on the property ladder because of outdated myths about what it takes to get approved.

With 35 per cent assuming they’re not eligible or don’t earn enough and 33 per cent finding the process and advice confusing, and stressful, it’s fair to presume that a huge amount of people who could potentially own a property, are discounting themselves without even trying!

One of the drivers of this trend is the fact that there are rapid changes in the world of work. While businesses look to embrace the fourth industrial revolution, globalisation and a growing gig economy, the way Britons make money is more varied than ever before.

When it comes to trying to get a mortgage, people living a varied working life might feel like a minority; but they’re a fast-growing minority and are leading the way for the rest of the country

A common example is people who are self-employed – that’s over four million people in the UK today – many of which mistakenly think their varied income or lack of three years’ worth of accounts means they automatically don’t meet requirements for a mortgage. No longer does everyone aspire to a nine-to-five with good benefits; a lot of people want to work for themselves, or for a variety of employers, choosing where and when they earn their living.

Despite this fantastic pace of change, unfortunately the mortgage advice market hasn’t necessarily kept pace with these key economic and social developments.

Advice varies enormously between brokers and criteria varies significantly from lender to lender. When one person goes to a broker that fails to secure a mortgage or applies directly to the wrong lender, they presume this goes for everyone and tell their friends and family so.

Of course, there will still be some people who will face challenges for one reason or another, but the key to truly understanding your eligibility for a mortgage is getting the right advice for your situation.

For real life ‘flexi crowd’ blogger Naomi Willis, the idea of a mortgage seemed an impossible ask. Naomi says: “My husband and I guessed we couldn’t get a mortgage because we had a new business and some poor credit history. On paper, we were not mortgage material.

“It always felt easier and safer not to bother applying until we were ready – out of debt and back on track. However, to my surprise my presumptions were proved wrong recently as we discovered that we are eligible and we could be homeowners sooner than we thought.”

Naomi and Ricky who run the Skint Dad personal finance blog, recently reviewed the life-changing service they received when they called Online Mortgage Advisor. What was previously a five-year plan to get a mortgage, has turned into immediate action to get a mortgage in the coming months! Read their story here .

To be passed to the right broker for your situation visit www.onlinemortageadvisor.co.uk or call 0808 189 2301.

Case studies are available upon request:

Melissa Evans (29) had previously been declined a mortgage but after finding Online Mortgage Advisor she was connected to an advisor who could give her the right information. She now owns a house in Stoke-On-Trent.

“When our landlord told us he wanted to sell, my confidence in our ability to get a mortgage was so low that offering to buy it ourselves just didn’t feel like an option. We received some bad advice when looking at getting a mortgage a few months before – we were told that a payday loan would help our credit score and therefore chances of getting a mortgage. We quickly learned this wasn’t the case and the advice we had been given had actually back fired and gone against us.

“That as well as a missed credit card payment meant that I just assumed there wouldn’t be a lender out there who would help us and inevitably we’d have to move into another rented house.

“Being declined a mortgage had really knocked me. I felt so upset and trapped. I didn’t ever see a way of getting onto the property ladder and the situation had triggered anxiety and worry, thinking about our future. There were some days when I felt so low I couldn’t even face going to work.

“Renting has its benefits and it has certainly helped us. But, we were at a stage in our lives where we needed to think about the future, about our family and put our money into an asset that might one day give us a return. “

When Terry McAlpine (43) realised his ex-partner had clocked up £48,000 worth of debt, he didn’t realise it would scupper his chances eight years later of buying a house, but that’s what happened. Terry and his wife, Charlotte (33) found a dream four-bedroomed townhouse in Northamptonshire, close to Terry’s work, but their mortgage application was declined due to the adverse credit.

“When we gave our details to Online Mortgage Advisor, we never imagined it would happen all as quickly as it did. If we hadn’t succeeded in getting the mortgage we wanted we would have been stuck renting, with me being away from my family Monday to Thursday for another few years.

“While I am still repaying back the debt accrued on my credit card, we feel much more secure financially now that we have money invested in a property. We’re loving our new home and have already filled the spare fourth bedroom with the latest addition to our family – our beautiful six-month-old baby!”