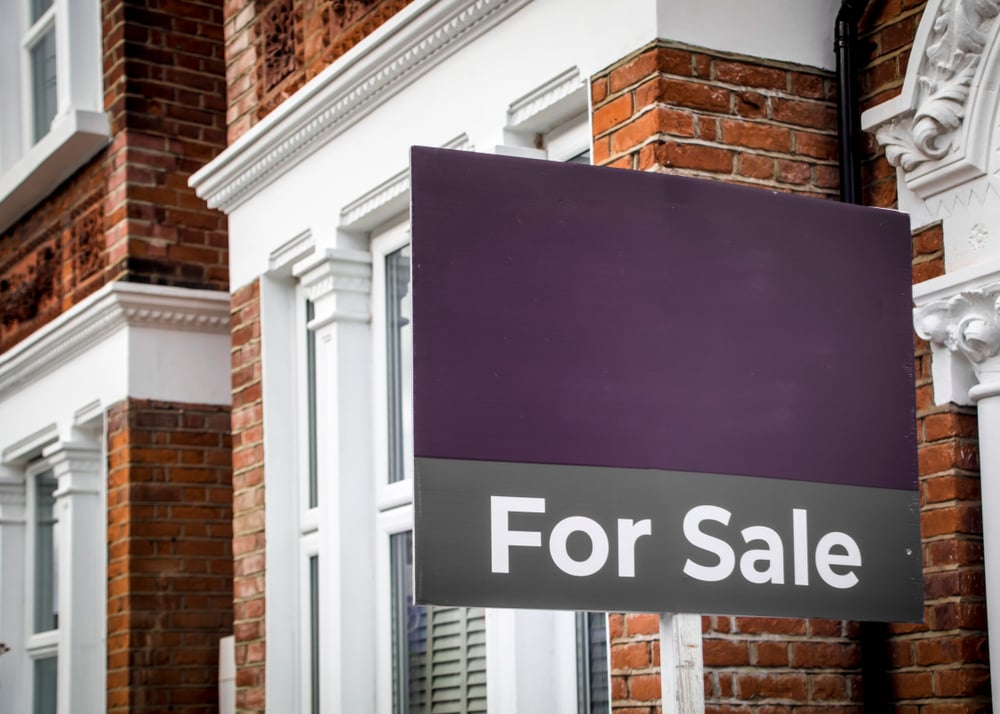 According to Gov.uk, buying or selling a home normally takes between two to three months, but the process can take longer if you’re part of a chain of buyers and sellers. But it seems some properties around the UK are having a hard time being flogged by estate agents in comparison to others.

In a bid to find out which areas of the UK sell the fastest and slowest, Online Mortgage Advisor analysed thousands of property listings on Rightmove to determine how long, on average, properties are listed for in each UK city, as well as which cities have the oldest property listings.

How long does it take to sell a home in the UK?

According to our analysis, the average time it takes to sell a house in the UK is 101 days (just over three months) from the first day of marketing to legal completion. But which cities in the UK find buyers the fastest and slowest?

Homes in Oxford take the longest to sell, with properties being on the market for 152 days, on average, before being sold. Homes in the city take 51 days longer to complete than the UK average, with the process taking around five months from start-to-finish for Oxford residents.

Three days faster than first place Oxford is the city of Middlesbrough, taking 149 days on average for houses to be taken off the market. Following closely behind in third are homes in Slough, with properties being on the market for 148 days, on average, before completing – one day quicker than Middlesbrough.

Fourth spot goes to the seaside town of Blackpool, known for its annual lights festival and Blackpool Pleasure Beach. Properties in this area take 146 days on the market before completing, on average – 45 days longer than the rest of the UK, according to our analysis.

Perhaps unsurprisingly, properties taking the fifth longest time to sell are found in the capital of England, London. Properties in the capital are on the market for 138 days, on average, before being sold for around half a million (£477,800) – a whopping £239,966 more than the average UK house price!

Just over a week quicker than London is Sunderland, in the North East, with homes being on the market for 130 days, on average, before being sold.

Seventh spot goes to the East Midlands city of Lincoln, with properties being on the market for an average of 127 days before being sold – just over three months.

Newcastle-upon-Tyne, renowned for its brown ale and nightlife, is in eighth, taking three months and one day on the market before being snapped up by a buyer – 121 days to be precise – 20 days longer than the UK average.

In ninth is the coastal town of Bournemouth, with the city’s properties staying on the market for an average of 115 days before completion. That’s one day slower than Blackburn who takes the tenth spot! Where do properties sell the quickest?

If you’re looking to sell your house quickly, you’re in luck if you live in the Scottish capital of Edinburgh, where it is estimated that you can secure an offer in just 45 days from listing your property to completion – 56 days quicker than the UK average! This figure is a far cry from Oxford, where homes stay on the market for a whopping 107 days longer!

Following Edinburgh is Glasgow and Dundee in second and third spot, with properties being sold after 47 days and 72 days, respectively.

Fourth and fifth are awarded to the West Midland cities of Coventry and Stoke-on-Trent, respectively. In Coventry, properties spend an average of 74 days on the market before completion, whereas Stoke takes 77 days, on average – three days more than their neighbouring city.

Bristol and the East Midland cities of Mansfield and Northampton follow, with all three cities taking 80 days on the market before being sold – three weeks faster than the UK average.

Next up, taking an average of 84 days before being sold, is Swindon and England’s ‘second city’, Manchester – this equates to almost three months on the market! 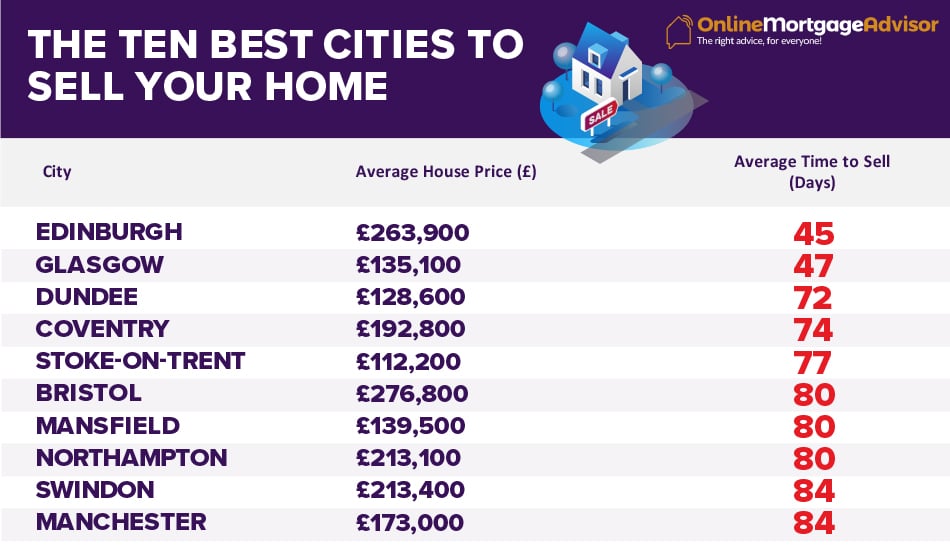 How do different regions compare?

Homeowners in Scotland needn’t worry about their home taking too long to sell, with properties taking 55 days to be sold in the region, on average. Bearing in mind the UK average is 101 days, the region typically sells 46 days quicker – around a month and a half! 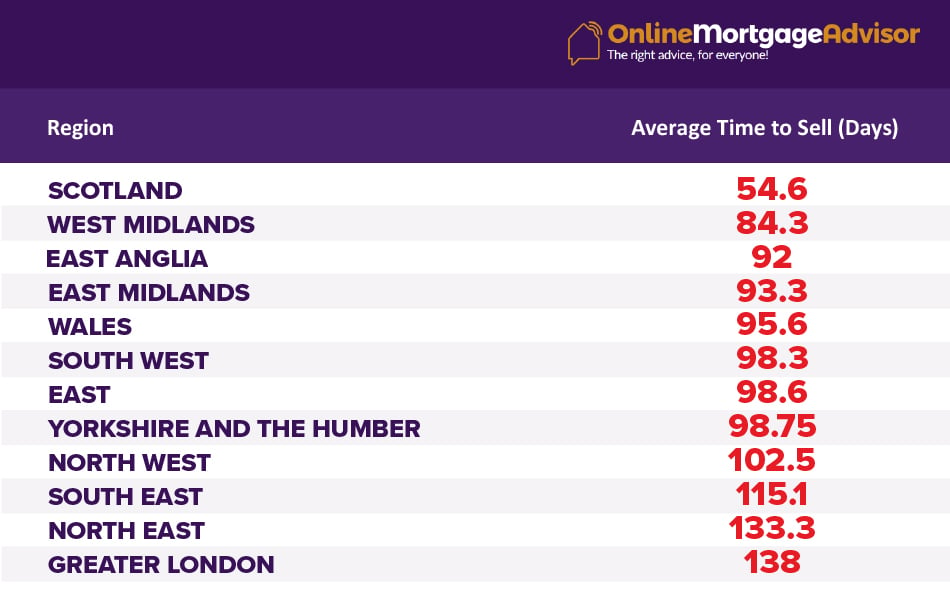 How to increase the chances of a fast property sale:

If you are looking to sell your house quickly, you may be able to shorten the average time it takes to sell a property in your city by ensuring that:

The average time taken for a property to sell in the UK by city was obtained through analysis of the Post Office Money Mortgages’ Rate of Sale Report. Using this data, the average time for properties to sell across the UK was also calculated as 101 days.

Properties having the oldest listing date (and therefore being on the market for the longest) were obtained through Rightmove’s property listings.

Please note: Data was obtained on 02/09/20 and is accurate as of this date. Header photo credit: Willy Barton / Shutterstock